From the European perspective, CAR T-cell therapies bear enormous opportunities. This kind of treatment is emerging as an effective treatment for cancer that is likely to become standard of care in certain indications. Recently, clinical trials resulted in impressive response rates as high as 60–85% in patients with various lymphomas and leukaemias of B-cell origin.

Consequently, the Food and Drug Administration (FDA) designated T-cell treatment in 2014 as a “breakthrough therapy” for relapsed and treatment-resistant acute lymphoblastic leukaemia in adults and children. This award recognizes new therapies “that may demonstrate substantial improvement over existing therapies” for life-threatening conditions.

The award and the clinical successes have boosted the field and attracted the attention of the wider scientific and medical community, as well as the broader general public. Moreover, these new therapies imply considerable economic expectations. For instance, Juno Therapeutics is presently one of the most prominent start-up companies developing CAR therapies. The US founders were able to raise more than $300 million in funding in less than 12 months. This example illustrates why cellular therapy is regarded by well-renowned analysts as a billion-dollar industry.

Notably, European health care systems would benefit in terms of the improved cost-effectiveness of CAR therapies. Conventional cancer therapies are often at least 2-3 times more expensive than cellular CAR therapy, which is estimated to cost 50,000-70,000 Euro. Therefore, not only patients will benefit from CARAT but also the pharmaceutical industry and health care providers.

However, despite the extraordinary opportunities for patients, healthcare providers and medical industry there are demanding challenges ahead for the European community. Most of all, there is already strong international competition that is illustrated best by the geographical distribution of CAR trials that are registered at www.clinicaltrials.gov (see map).

The majority of the trials take place in the US. However, China is catching up and unfortunately, Europe is in danger of being left behind. Clinicians already report cases of “tourism” of patients to US clinics that offer CAR therapies demonstrating the urgent need to also establish in Europe innovative and efficient personalized cellular cancer therapies. 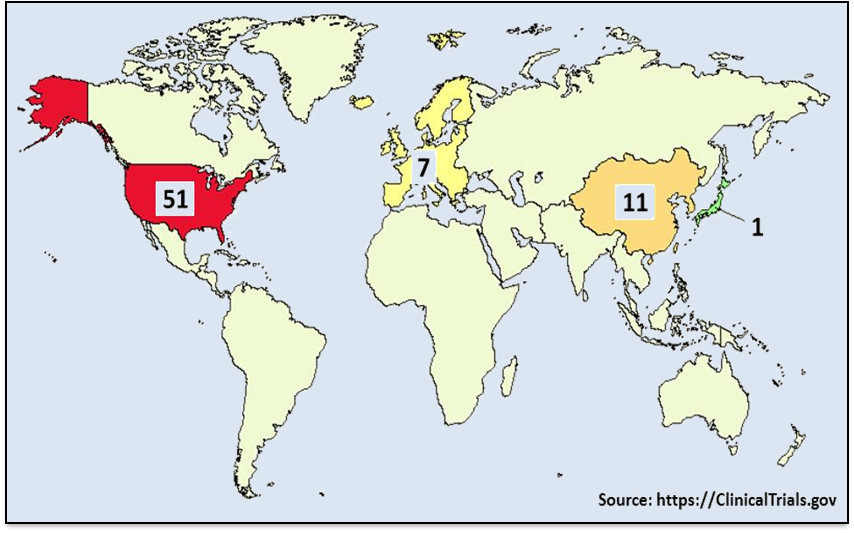 Geographic distribution of chimeric antigen receptor trials (as of March 2015). 70 trials are registered worldwide at ClinicalTrials.gov. In Europe there are presently 7 trails registered: UK (4), Germany (1), Sweden (1) and Swiss (1).

CAR therapy is a young discipline. There are limitations and hurdles to overcome before it will be established as a standard treatment in the clinics. A broader implementation strongly depends on the development of T-cell manufacturing processes that are robust and scalable. This would make T-cell therapies more accessible, in part by attracting interest from commercial entities, who would ultimately transform adoptive T-cell transfer from “boutique” to “chain store”.

Given the need to reach a wider dissemination of CAR T-cell therapies, what are the basic requirements to optimize manufacture of a gene-modified cellular therapy product? Our central working hypotheses can be summarized as follows: